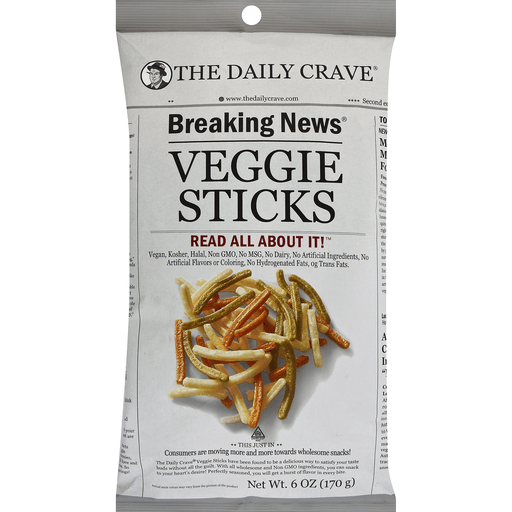 Breaking News: Read all about it: vegan, kosher, Halal, non GMO, no MSG, no Dairy, no artificial ingredients, no artificial flavors or coloring, no hydrogenated fats, 0 g trans fats. This just in. Consumers are moving more and more towards wholesome snacks! The Daily Crave Veggie Sticks have been found to be a delicious way to satisfy your taste buds without all the guilt. With all wholesome and non GMO ingredients, you can snack to your heart's desire! Perfectly seasoned, you will get a burst of flavor in every bite. Actual stick colors may vary from the picture of the product. www.thedailycrave.com. Give in to your cravings. Facebook. Twitter. News Flash: Eating wholesome snacks is all the rage. Say goodbye to greasy chips that are full of artificial ingredients, flavors and colors. The Daily Crave Veggie Chips contain none of the bad stuff but still gives you all the great taste you desire. Totally vegan with no preservatives, snacking well never tasted so good. So when you're longing to munch, reach for The Daily Crave. Princess diary opened. High-maintenance celebrity admits secret vice. I've made it clear to my people that I just can't go on stage unless I eat a whole bag, said Beverly Hills diva Amanda Lenz to a tabloid reporter. They're simply fabulous! Like me! Lenz was referring to a particular brand of vegetable snacks, she claims that they calm her emotions and allow her to be grounded when she faces screaming fans. It's all about balancing your energy she bragged. Online today. In the media. Vegan snacks! A tasty alternative with more people following a vegan lifestyle you may think it's difficult to find snack foods that fit the bill. Fortunately, there's a good variety of non GMO and vegan snacks available at your favorite supermarket that are just as delicious as the non-vegan ones. Products like Veggie Chips, Veggie Sticks and Veggie Skinniez give the crunch we all love and the taste that we crave. So give in to your cravings! Top Stories. News flash. Missing mountaineer Found Alive. Food supplies key to preservation. Five months ago, a veteran wilderness expert disappeared during an expedition in the Alaskan wilderness. he gave a Juneau grocery market owner quite a surprise when he walked right out of the woods into the store and immediately headed for the snack aisle. Later questioned by police, he claimed to have survived solely on the veggie snacks he had taken with him. Incidentally, he had lost his wallet in the wilderness and was arrested for shoplifting more veggie snacks. Local News. Hot Topic. Authorities capture infamous Bank Bandit. Consumption preferences lead to arrest. After a string of daring bank robberies from coast to coast the alleged bank bandit was take into custody yesterday. Authorities credited the capture to the signature crumbs left at every crime scene. The arrested man is apparently addicted to vegetable snacks, and the authorities indentified him by tracing large shipments of the snacks to a suburban apartment. Made in USA.