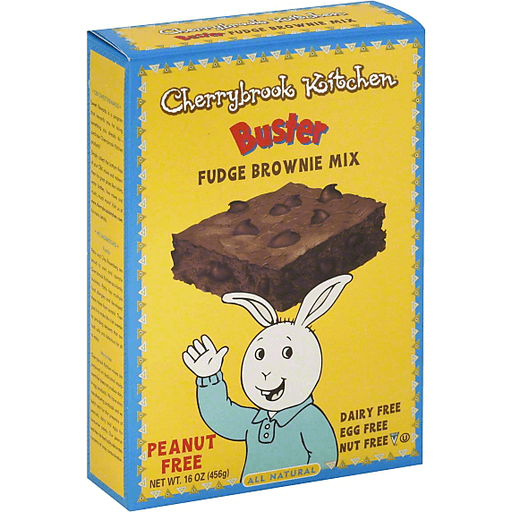 All natural. Dairy free. Egg free. Nut free. Peanut free. Vegan. Buster, Arthur and Binky were tossing a baseball back and forth in Buster's backyard. Hey Buster, watch out! Here comes a fast one! said Binky. The ball flew right over Buster's head and into the neighbors' yard. As they went to get the ball, inky stopped suddenly and Arthur bumped right into him. Ouch! Why did you stop like that? Asked Arthur rubbing is head. Binky didn't answer. He was busy sniffing. I smell something chocolate and yummy coming from your house Buster. Arthur sniffed too and said Binky's right! Something smells really, really good. Then they all ran to Buster's house. Sitting on the kitchen counter was a big plate of freshly baked brownies! Wow! All three said at the same time. Binky's stomach began to rumble. He held his stomach and said I don't think I can have these because of my peanut allergy. Just then Buster's mother entered the kitchen and placed a hand on Binky's shoulder. Binky, she said, these brownies are safe for you or anyone with food allergies to eat. Before Arthur and Buster could blink Binky grabbed the plate of brownies and sat at the kitchen table. Binky ate three brownies. Hey! said Arthur, Wait for us! You better hurry, said Binky, these are the best!