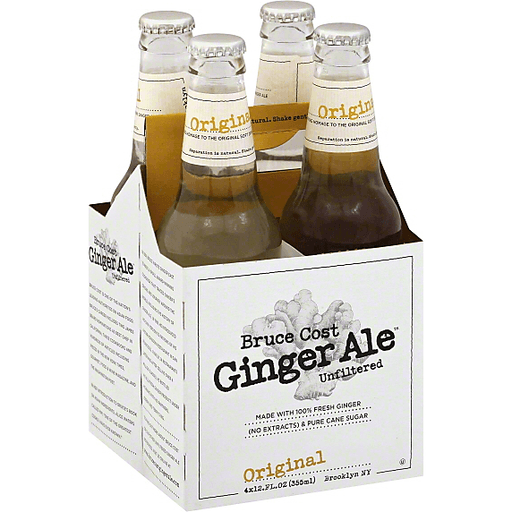 Bruce Cost Ginger Ale™ Original Unfiltered. Separation is natural. Paying homage to the original soft drink, ginger ale. Made with 100% fresh ginger. (No extracts) & pure cane sugar. Bruce Cost is one of the nation's leading authorities on Asian food. Bruce's career includes two James beard nominations as best chef in California, three cookbooks and hundreds of articles including pieces in the new York times, gourmet, food & wine magazine, and the Washington post. In her introduction to Bruce's book on Asian ingredients, Alice waters called him, "one of the greatest cooks I have ever known." In 1984, Bruce wrote ginger east to west, a small award-winning cookbook that traced ginger's origins and journey around the world, including the history of ginger ale. In 1989, he introduced his own version to patrons of his 4-star monsoon restaurant in San Francisco. Finally, 14 restaurants later and after selling over 4 million glasses, he bottled his all-fresh ginger product under his name with his partners, Joseph and Terry tang. Brooklyn NY. Please recycle. Proud descendent of the original soft drink, Bruce Cost Ginger Ale is delicious, sparkling and rich with whole ginger, long enjoyed for digestive comfort. To find out more about Bruce cost or our other unfiltered ginger ale beverages, visit us online at www.brucecostgingerale.com.