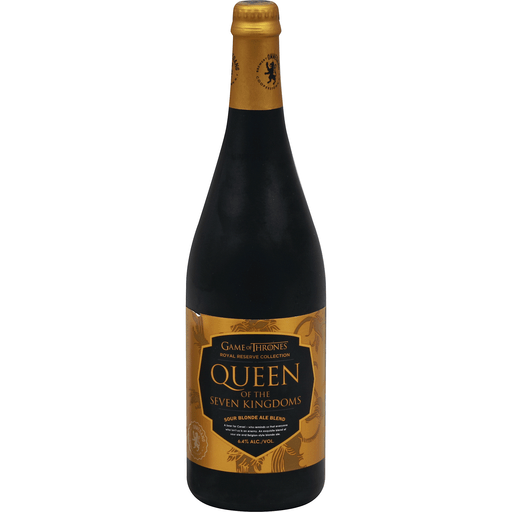 A beer for Cersei - who reminds us that everyone who isn't us is an enemy. An exquisite blend of sour ale and Belgian-style blond ale. As the war for the seven kingdoms rages to a climax. Ommegang presents the Royal Reserve Collection. This collection of four exclusive and extremely limited release ales, available in 2018, is brewed as an homage to the four epic figures still standing against the annihilation of mankind. Queen of the Seven Kingdoms - A beer for Cersei - is an exquisite blend of sour ale and Belgian-style blonde ale, it pours a pale golden hue with a brilliant white head, while notes of citrus and melon meld with hints of apricot over a malty base. Queen of the Seven Kingdoms is the second in our Royal Reserve Series. These are beers representing what a court brewer would offer a noble lord or lady. Perfect balance and pure drinking pleasure. 6.4 alc/vol. Brewed and bottled by Brewery Ommegang Cooperstown, NY.