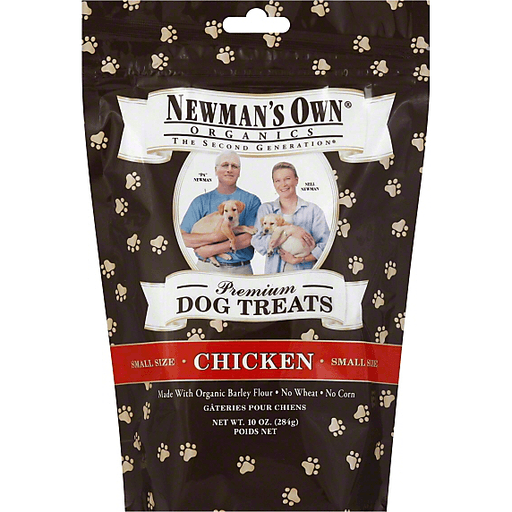 Made with organic barley flour. No wheat. No corn. The second generation. Newman dog tells all! The literary world is reeling with the news that Paul Newman's dog is shopping a tell-all book on the famous actor and his family. Insiders say that Newman, in an attempt to squash the book, has tried to dissuade his best friend from going ahead with the project by launching a line of delicious pet food and treats. The dog's agent has not return Newman's calls. Several editors who have received the proposal say that the dog writes openly about Newman's persistent disobedience of the house rules, Newman's deep rooted fear of drinking toilet water, and his penchant for wearing mismatched socks. The dog also reveal that Paul's daughter, Nell is a mess-making machine in the kitchen and at the breakfast table. It is all I can do to eat all the scraps that drop to the floor. Along with other eccentricities of the family, Nell's six new pet chickens leave the author perplexed. What kind of affection do they show her? I've never seen a chicken lick her face at 6 a.m. Where did I go wrong? In spite of vaunted candor of the book, however, the author exercises some discretion. The only reference to the sensitive subject of age is diplomatic. Let's just say they are both well over 250 years old. Due out this summer, Scraps on a Cold Stone Stoop has already created a bidding war for film rights in Hollywood. Nutritional Statement: Intended as a reward or training treat and does not replace your dog's regular food. New improved flavor. Certified Organic by Oregon Tilth.